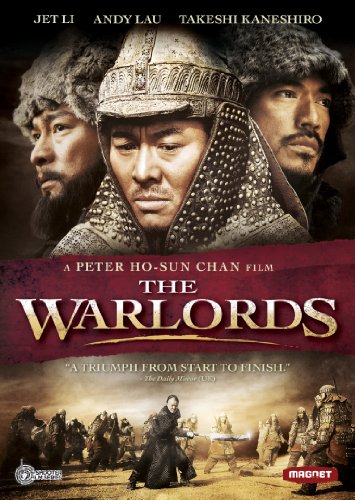 Brand : Magnolia Films
from USA
to Vietnam
in 5-8 days
At your doorstep by Aug 09  to Aug 12 with standard delivery

Set in the midst of the Taiping Rebellion of the 1860s, THE WARLORDS stars Jet Li as General Pang, who barely survives a brutal massacre of his fellow soldiers by playing dead, and then joins a band of bandits led by Er Hu (Andy Lau) and Wu Yang (Takeshi Kaneshiro). After fighting back attackers for a defenseless village, the three men take an oath to become "blood brothers," pledging loyalty to one another until death. However, their lives quickly derail as they become embroiled in a web of political deceit and a love triangle between Pang, Er Hu and a beautiful courtesan (Xu Jinglei). .com ---- There are some grand themes at the heart of The Warlords, like honor and sacrifice, power and mercy, heroism and betrayal… plus lots of cool battle scenes, nifty stunts, and freely flowing blood. The setting is China in the 1860s, when a seemingly endless war for control of the country rages on between the Imperial Ching Army and the Taiping rebels. As the action begins, Pang Qingyun (Jet Li), a Ching general, and his men have been abandoned by a fellow (but much less honorable) general, resulting in a terrible slaughter at the hands of the rebels--in fact, only Pang survives. But he soon joins forces with Zhao Er-Hu (Andy Lau) and Zhang Wen-Xiang (Takeshi Kaneshiro), forming a "brotherhood" that all three swear will bind them together forever, come what may. Pang, whose battle tactics are dangerous but also bold and innovative, assumes the leadership role, but as the three leaders and their ragtag soldiers overcome enormous odds and take the key rebel-held cities of Suzhou and then Nanking, he becomes increasingly megalomaniacal and ruthless, severely testing the bonds of the brotherhood and alienating the more merciful Er-Hu in particular. (In the end, all of this proves to be essentially futile, as our trio's fates don't lie in their own hands after all.) Director Peter Ho-Sun Chan does a nice job of staying on top of all of this; the battle scenes, both large-scale and one-on-one, are well choreographed, athletic, and exciting, although not as epic or spectacular as John Woo's work in Red Cliff. But it takes quite a while to figure out what's going on (which might have something to do with the fact that the screenplay is credited to no less than eight writers), and The Warlords has passages that are not merely confusing but dull. All in all, a good movie that could have been even better. --Sam Graham
Show More
Reviews