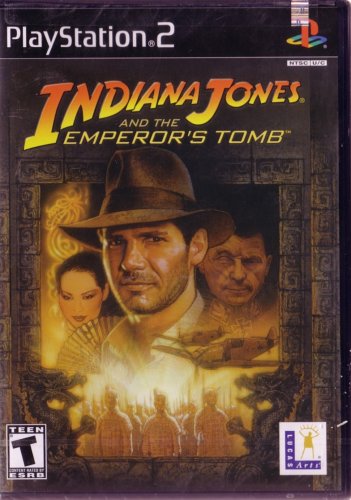 Brand : Lucasarts
from USA
to Vietnam
in 9-15 days
At your doorstep by Jul 02  to Jul 08 with standard delivery

"If adventure has a name, it must be Indiana Jones." So says the Temple of Doom movie poster, and--Lara Croft notwithstanding--Indiana Jones is still synonymous with glory, romance, treasure, and adventure. Previous Indiana Jones games were produced by the graphic-adventure game masters at LucasArts. This latest installment is an action-oriented romp made by the Collective, the same development house that produced the critically acclaimed Buffy the Vampire Slayer for Xbox. The Buffy game engine is a good fit for Indy, as he travels the world on a quest to prevent the discovery of an ancient Chinese secret that could spell the end of creation itself. Such a quest should be easy for an adventurer like Indy, and with game controls that are as well laid out as these, it is easy. Indy can run, jump, shimmy up ropes, swing with his whip, and duke it out with nasty villains. True to the movies, Indy also has to navigate an almost constant stream of deathtraps. Caves full of traps, ruins full of traps, medieval castles filled with traps, and guess what you find in China, yes, more traps. It gets repetitive, but the game has some clever tricks in its floppy hat. For example, skulls make noise, so Indy can toss a few and watch crocodiles target them instead of him. Indy can execute quick punch combinations to knock his foes out, or he can pick up weapons such as a chair, plank of wood, machete, or firearm. His famous whip can be used to disarm foes. The only problem is the camera, which is difficult to keep in the right position--you have complete control of it, but it's hard to manage a camera while you're fighting a martial arts expert, a Nazi with a gun, or a poacher keen on decapitating Indy. The graphics are good, pleasantly reminding you of some of the movies' more memorable locales. The in-game Indy mug looks like Harrison Ford down to the chin scar. Other nice touches include how Indy has to actually pick up his hat if it falls off during a fight, and the little '30s plane flying over the aged and weathered world map. The music is pure John Williams, and the voice work is handled by convincing imitators. The guy they got for Indy, in particular, sounds a lot like Ford himself. Sadly no other movie characters of note appear in the game. (I was looking for John Rhys-Davies at least, because he seems to be in every video game that comes out.) Indiana Jones and the Emperor's Tomb does right by its license and provides hours of entertainment for anyone who's ever wanted to relive the movies starring the most exciting adventurer alive. Lara Croft, eat your heart out because if gaming adventure has a name, it must be Indiana Jones. --Bob Andrews Pros: * True to the films * Great graphics and fight controls * Good voice acting Cons: * Too many trap sequences * Camera problems common to third-person action games
Show More
Reviews

Indiana Jones and the Emperor's Tomb